The newest and most advanced model from Kaito’s Voyager radio family, the KA600 Voyager Pro is designed for both everyday use as well as emergency preparedness applications. It offers different methods to power up including AC/DC adapter, three AA batteries (not included), the built-in rechargeable Ni-MH battery that can be charged by the AC adapter, hand cranking or a computer, and the patented flip-up 180-degree adjustable solar panel provides power for the radio even when no battery is installed. With its revolutionary design and versatile functions, it’s not only an ideal choice of a bedside radio but also an indispensable tool for emergency preparedness purposes, travelling, camping, backpacking and other outdoor activities.
Specifications:
Over the years, Kaito has proudly supplied millions of radios to the State Department, the United States Army, the United Nations and other government agencies and NGOs for their humanitarian relief efforts. It’s hard to believe, but often times a radio is the only way to connect with the outside world in some parts of the globe, and radio broadcasting has become an important and effective tool helping the US and its allies build strong relationship with the locals and educate them to stand up against conflicts and extremism, which in return makes our troops and diplomats safer and more successful in their missions.

*No Endorsement of Kaito by the US Department of Defense, Department of State, United Nations of their personnel is intended or implied. 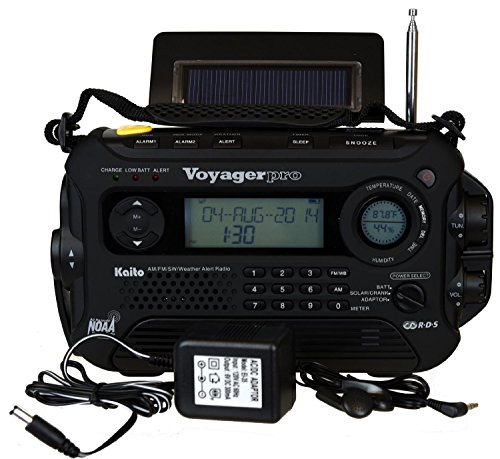 What is RDS? Radio Data System, or RDS, is a communications protocol standard for embedding amounts of digital information in conventional FM radio broadcasts. RDS standardizes several types of information transmitted, including time, station identification & program information. What is NOAA Alert? Connected to the Emergency Alert System (EAS) through NWR (National Weather Radio) network provided by NOAA (National Oceanic and Atmospheric Association), this feature will automatically activate the radio to inform you of any hazardous weather conditions or warnings including natural, environmental and public safety while the radio is set at the "Alert" mode. The newest and most advanced model from Kaito's Voyager radio family, the KA600 Voyager Pro is designed for both everyday use & emergency preparedness applications. It offers different methods to power up including AC/DC adapter, three AA batteries (not included), the built-in rechargeable Ni-MH battery that can be charged by...

This is the first of a series of shows on the Kaito Voyager Pro 600 Emergency Radio. If you found this video useful, please share using the Share button below. Please subscribe to my channel...

We take a look at the Kaito KA600 digital solar power emergency radio. Be sure to take a look at our website at UltraTechLife.com! We also give away lots of free stuff to our visitors during...

There are no reviews yet.

Sign up now to MySurvivalReport.com to receive your FREE Survival Report to learn about the most common types of disasters in your area and how to keep yourself and your family alive during these times of Crisis when Emergency Crews can’t get to you.

During most disasters rescue crews won’t be able to get to you for several days, and you will need to know how to survive on your own.  Sign up now to learn how.

Remember, we are not out of danger from the COVID-19 virus. Always follow the guidance from health officials as they’re trying to stop the spread of this deadly disease.
Check in with the CDC for updated information: